About Tania de Jong AM

When she was just 14 years old her best friend told her not to bother having singing lessons. So it’s not surprising that her mission is to change the world, one voice at a time. Tania’s TED Talk ‘How singing together changes the brain’ has sparked international interest.

Tania is a global authority on creativity, innovation and collaboration. With a grandmother who invented the foldable umbrella, innovation is in her blood. And, as the daughter of Holocaust survivors, she has learnt about resilience and re-invention and developed a passion for diversity and social inclusion.

Tania is an agent for change. She is an inspirational and moving storyteller and presenter. Her keynotes, combined with the power of song, are transformational. She is known for her ability to unleash creative energy and capabilities, expand mindsets, build ‘can-do’ teams and strategies to develop a culture of innovation, diversity and inclusion.

Tania has an unusual background because her work and knowledge spans the business, public, creative and community. She is able to draw together cross-sector themes relevant to business and government sectors. She is a dynamic and insightful speaker, MC, panel member, workshop leader and performer and enjoys customising her contributions to create outstanding and memorable outcomes.

Individuals, communities, corporations and governments face increasing challenges and accelerating change, and Tania expand mindsets and inspires audiences to think more laterally and creatively about the future. In 2018 Thinkers50 invited her to be a keynote speaker and performer at the World Business Forum in Denmark.

Tania is also the Founder of four charities including Mind Medicine Australia whose objective is for psychedelic-assisted psychotherapies to play a major role in improving the treatments available for Australians suffering from mental illness. Tania’s latest charity is Umbrella Foundation which is committed to telling stories that matter through the innovative use of music, theatre and other artforms, raising consciousness and inspiring generosity, diversity, inclusion, harmony and compassion. Umbrella Foundation recently presented the world premiere of Driftwood – The Musical and will present further season in 2023 and beyond. Tania played the role of her grandmother Slawa Duldig to wide acclaim.

Creativity Australia works with a range of marginalised individuals (including migrants, people with depression and disabilities and job seekers) and communities to build supportive networks through the acclaimed With One Voice choir social inclusion programs. In 2016, Creativity Australia received the Melbourne Award for Contribution to Community and has been named in Anthill’s Top 100 Smart Innovations every year since 2013.

Tania founded The Song Room which has provided access to creative learning and wellbeing for over one million disadvantaged Australian children since 1999.

Tania has a Bachelor of Law (Honours) from the University of Melbourne and is a graduate of Victorian College of the Arts in opera, music theatre and voice. She was appointed a Member of the Order of Australia in June 2008 for service to the Arts as a performer and entrepreneur and through the establishment and development of music and arts enrichment programs for schools and communities.

Tania’s other awards include Ernst and Young Australian Social Entrepreneur of the Year, the ‘Outstanding Individual Contribution to Australian Culture’, Churchill Fellowship and The Melbourne Award. She was inducted into the AGSE Entrepreneurs Hall of Fame at Swinburne University and named Brainlink Woman of Achievement. Tania was named in the 2016 Impact 25 Awards which honour the social sector’s most influential people for their significant and positive impact in Australia and around the world. Tania was named in the 100 Women of Influence, the 100 Australian Most Influential Entrepreneurs and named as one of the 100 most influential people in psychedelics globally in 2021. In 2019 she was honoured with the Award for Meritorious Service to the Community in the Victorian Multicultural Awards for Excellence.

Major clients have included the leadership teams of Woodside, Department of Defence (DST Group), McKinsey & Company, PwC, Ernst & Young, BCG, AGL, Veolia, Spotlight, David Jones, Perpetual, Telstra, Transurban, Mondelez, ANZ, CBA, NAB, BHP, INSEAD Business School, AON, The Florey Institute, CPA, Rotary, various Governments, Universities and schools. She has been a keynote speaker at many leading innovation, education, entrepreneurship and technology conferences and special events including the International Innovation Symposium in Vienna. Tania writes articles and has been featured and interviewed across major media including Huffington Post, ABC, AFR BOSS Magazine, The Australian, The Age, Sydney Morning Herald, 2UE and many others. She has spoken and performed in over 40 countries.

Tania has released seven albums with her acclaimed singing group Pot-Pourri and has released five solo albums, Soundsations, Heaven on Earth, and the new releases Flying Free, Solitary Harmony and The Breezes at Dawn have Secrets to Tell.

(Trivia: Tania attended college in the USA on a tennis scholarship. Her grandmother Slawa Duldig invented the first foldable umbrella in Vienna in 1929.)

Tania has appeared on: 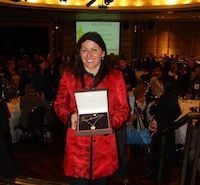 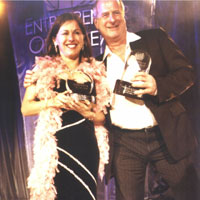 Tania de Jong with her award

Honoured with the Accessibility Award in The Melbourne Awards 2005